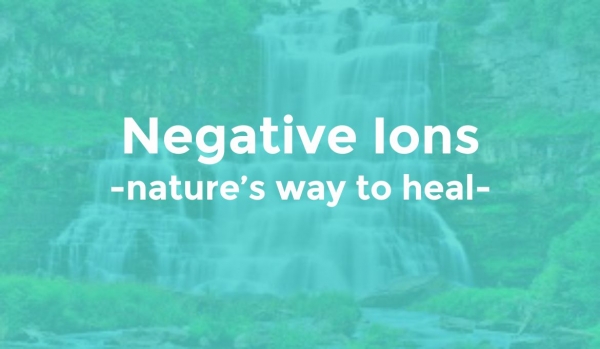 When feeling depressed or fatigued our elders generally suggest, a walk in the fresh air or a relaxing shower. Ever wondered why? And why are they so refreshing?

Negative ions! Not as negative as they sound. They are basically oxygen ions with an extra electron attached which is produced by water molecules. Negative ions promote alpha brain waves and increased brain waves amplitude which results in a higher awareness level. With the negative ions, the body is able to absorb oxygen into the blood cells better and they also filter airborne contaminants.

Positive ions are released into the atmosphere by air conditioners, televisions, computers and other electronic devices. These ions are responsible for a variety of symptoms including headaches, fatigue, nausea, and dizziness.

Negative ions are most abundantly found in the air near waterfalls, rivers, seas and moving water but unfortunately they are low in a closed room and our air-conditioned offices. That is why post a long day of work in a closed office one feels drained out.

An average negative ion around a waterfall is around 100,000 units and around a country side around 3,000 units whereas, in a building or a closed office it ranges from 0 to a few hundreds.

Negative ions lift our mood, stimulates our senses, improves our appetite, also provides relief from many allergies. That is the reason why in old days’ doctors used to recommend a vacation to a hill station as a remedy for various ailments. Not only does it take us away from the hustle bustle of our daily life, it also provides us with ample of negative ions for our body to heal quickly.

We cannot be on a vacation all our life but we can definitely do a few simple things to improve negative ions around us, like

No comments to show.